Mongoose is a brand name of bicycles originally designed, manufactured, and sold by BMX Products, Inc. Mongoose merged in 2001 with Pacific Cycle, a subsidiary of Dorel Industries. Based in Madison, Wisconsin, Mongoose manufactures world-class bicycles and carries a full line of mountain bikes including dirtjump, hardtail, trail and youth bicycles. The company is a master at making BMX, MTB and Urban Bikes.

Why consider the Mongoose Boot’R?

Mongoose teamed up with whip-master general, Steve Romaniuk and a masterpiece was born—the Boot’R. Unveiling the Mongoose Boot’R gave other rival companies a run for their money, as the Boot’R seemed to dominate in all aspects of its class, thereby posing itself as one of the toughest contenders for the Best Bike Award.

Equipped with a Mongoose Horst Link DH Aluminum frame with 210mm of travel, the Mongoose Boot’R takes suspension and precision to the next level. The bike comes with Hayes Prime Sport hydraulic disc brakes. In addition, it has also got the superior RockShox Domain triple clamp fork with 200mm travel to ensure that you get a ritzy ride through some huge hits.

The Boot’R claims to provide the best downhill race-worthy spec in a pedal-friendly platform. The bike has got SRAM X7 shifters (right only) with Matchmaker clamp and the rear derailleur hails the SRAM X9. Moreover, the Avid Elixir R levers with Code 5 four-piston callipers with 180mm rear and 203mm front rotors provide tons of stopping power—stoppies are now easier than ever!

The Mongoose Boot’R is in a league of its own when it comes to performance. The RockShox Domain R is actually a race-ready piece of kit offering super stiff chassis and excellent well-controlled action. There is the SDG I-Beam 2014 alloy seatpost, while the seat is of Custom Mongoose SDG Bel Air I-Beam.

Mongoose has employed some serious tires in the Boot’R—the Kenda Excavator DH Stick-E 26×2.5”. The tires are undoubtedly heavy-duty pieces, so you can go VERY hard on this bike! However, though the tires are extremely good for wet-weather conditions, they weigh too much and are slow on dry terrains.

The Mongoose Boot’R features SRAM Ruktion 36 with bash guard cranks and SRAM Howitzer bottom bracket. Funn offers a quality direct-mount stem and a great shape bar with plenty of width, thanks to the E13 LG1+ chainguide. In addition, the superior and reliable KMC Z99 9-speed chain is installed in this bike. 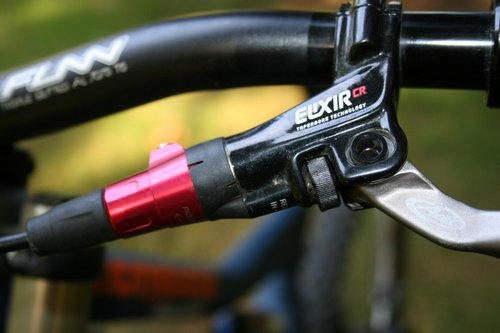 With a 17.5” chainstay and coming in three different sizes, the Boot’R is indeed a great-catch and perhaps the best for downhillers within a handsome budget. It’s hard to come across such superior specs, all loaded into one bike and that too with an affordable price tag. To top it all, the Mongoose Boot’R is indeed a bike with race-worthy specs featuring the Freedrive system, thereby offering riders excellent pedal efficiency along with a ride to be cherished.